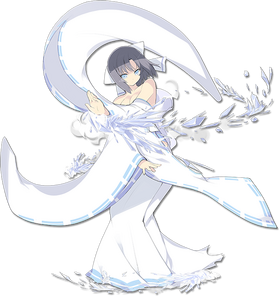 According to the Shinobi Syllabus for Senran Kagura: Shinovi Versus, Yumi's parameters are as listed:

Even though Yumi's defense is high, she has relatively low health, endurance, and attack power. She makes up for all of these, however, with freezing abilities that can stop opponents in their tracks, allowing her to easily gain the upper hand even in the most futile of situations. Taking advantage of her chain attacks, Aerial Rave, and Secret Ninja Arts is essential in order to make up for her various weaknesses.

Yumi's in-game stats from level 1 to level 50. Please note the numbers listed under the level intervals (anything with a +) does not indicate how much the stat increases between the two levels but rather how much it increases for every 1 level in that range:

General Advice
Yumi's strength may lie in her high defense, but it's her ice-based Ninja Arts that make her a force to be reckoned with. Nearly every type of attack she inflicts stands a chance of freezing her adversaries, and that chance only increases as she continues her assault with two Japanese hand fans as delicate and traditional as she. When against a group, try building up towards an Aerial Rave with a flurry of chain attacks to send them off flying.

For stronger enemies, it may be better to unleash deadly ice shards through her charged Breach Art by holding the

button. Her Breach Art has the added benefit of building her Ninja Art gauge quickly, providing for Breach Art-Secret Ninja Art combos that leave everything in her path frozen.

Flash/Flash Mode
The most efficient way to finish off enemies in large groups is by using Yumi's Aerial Rave. For stronger enemies, it's best to the simply freeze them with her Breach Art so it will be easier to perform follow up attacks for extra damage. Her chain finishers have no range, so be careful not to expose her back to opponents.

against a horde of enemies.

, for stronger enemies, use

and follow up into her Aerial Rave. If she's surrounded, use her Secret Ninja Art 2 to escape.

Retrieved from "https://senrankagura.fandom.com/wiki/Yumi/Shinovi_Versus?oldid=39164"
Community content is available under CC-BY-SA unless otherwise noted.