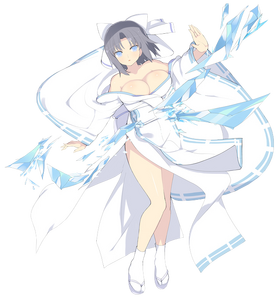 Even though Yumi's defense is high, she has low endurance and attack power. She makes up for these, however, with the majority of her moves having freeze abilities. This can stop opponents in their tracks, allowing her to easily gain the upper hand even in the most futile situations. To make up for her various weaknesses, she must take advantage of her chain attacks, Aerial Rave, and Secret Ninja Arts.

Yumi's in-game stats from level 1 to level 50. Please note the numbers listed under the level intervals (anything with a +) does not indicate how much the stat increases between the two levels but rather how much it increases for every 1 level in that range (when a dash is present, that means half of the levels have the first number while the other half has the second):

Stat wise, Yumi's strengths lie within her high health and defense which make her incredibly durable. Though she is rather weak offensively, she's accommodated by the fact that nearly all her techniques have the chance to inflict the frozen status ailment onto her opponents, rendering them temporarily immobile.

Her low endurance on the other hand makes her more prone to being staggered which can make combat against more powerful opponents rather tricky as she stands the constant risk of constantly being overpowered, and her abysmally low attack makes it even more difficult for her to overpower others.

The most effective way to turn the battle in her favor is to prioritize freezing her opponents with her aerial attack. Its effectiveness is range dependent which means the closer she to her opponent whilst preforming the attack, the more likely they are to be frozen. It's a risky, yet effective tactic.

Yumi also suffers from her inability to effectively guard break opponents which means that exploiting openings is a must. While her tap Breach Art allows her to guard break foes, it leaves her wide open for attack for a period of time with no chance to block. On the bright side however, her tap Breach Art can also be used to push back and sometimes freeze enemies who aren't blocking and can be useful tactic to help put distance between her and the opponent.

Her hold Breach Art sends ice out in five directions ahead of her, though when locked on to someone, it has slight tracking that will allow the ice to follow moving targets. Those hit with any of her ice shards stand the chance to be frozen, and just like with her air attack its effectiveness is dependent on range. However unlike her tap Breach Art, her hold Breach Art does not push enemies back.

Yumi's Aerial Rave has great suction power and can sweep up hordes of enemies while keeping them stationary. When she's surrounded by enemies this can be a useful way of cutting through their numbers with the least amount of trouble.

2 as it covers the most range and can group up a great number of enemies at the same time.

5 mash technique against a horde of enemies. If needed, one can always cancel her mash into a chain finisher be pressing triangle which will lead her to performing her Yang

2 technique instead of standard chain finisher. Her Yang

1 technique is fast and has good reach which makes it useful for going into an Aerial Rave quickly.

for an infinite combo, for stronger enemies, use

and follow up into her Aerial Rave. If she's surrounded, use her Secret Ninja Art 2 to escape.

As the case with Yumi's first three states, in Ice King mode nearly all her attacks have the chance to freeze enemies -- though the freeze rate is increased drastically. Yumi's seemingly quick and erratic movements while attacking allows for her to cut through hordes of enemies with ease, and her Ground

1 finisher is perfect for hitting multiple enemies at once as takes up wide area surrounding her and pushes those caught in front of her.

4 sends out a projectile that can tear through any enemies in front of her and those far away as well. Her aerial attack is similar in that it also fires a single projectile. However, her aerial attack can send distant enemies flying towards her if aimed correctly.

Cannot be used in this mode.

Retrieved from "https://senrankagura.fandom.com/wiki/Yumi/Estival_Versus?oldid=55006"
Community content is available under CC-BY-SA unless otherwise noted.