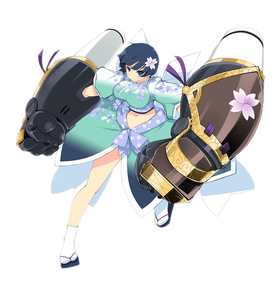 According to the Shinobi Syllabus for Senran Kagura: Shinovi Versus, Yozakura's parameters are as listed:

While Yozakura's defense is only average, her health, attack and endurance are the highest among the cast. Since she can't be staggered easily, she can close in on her opponents without much trouble. Her movement may be slow, but her dashes cover that.

Yozakura's in-game stats from level 1 to level 50. Please note the numbers listed under the level intervals (anything with a +) does not indicate how much the stat increases between the two levels but rather how much it increases for every 1 level in that range:

General Advice
Yozakura's weapons of choice are her large, pile bunker-inspired gauntlets. While a simple one-two punch can be executed quickly by pressing

together, pausing before the second

will give Yozakura time to trigger a miniature explosion from her weaponized knuckles before she delivers the next blow.

What's more, such attacks can also be charged multiple times for critical damage. Instead of aiming for an Aerial Rave immediately, try charging her attacks in-between her combustible assaults.

Flash/Flash Mode
After slamming your opponents with Yozakura's charged gauntlets, finish her chain attacks with an Aerial Rave. If she's surrounded by enemies, use her charged Breach Art by holding the

button. It has a wide attack range and can easily clean up any stragglers who somehow managed to escape her abuse.

Yang/Yang Mode
Yozakura can use the same battle strategy as in Flash Mode, but in Yang Mode, she can make more use of her charged Breach Art. This will allow her to build up her Ninja Art gauge and use Secret Ninja Arts more often. Keep in mind that she cannot use any pilebunker-inspired attacks after 3-4 weak attacks.

Yin/Yin Mode
It's possible to take out enemies with Yozakura's weak attacks, but if she doesn't want to get hit, create some space and charge her Breach Art into an Aerial Rave. Also, in this mode, she can only use her pilebunker after the 5th weak attack.

Retrieved from "https://senrankagura.fandom.com/wiki/Yozakura/Shinovi_Versus?oldid=40849"
Community content is available under CC-BY-SA unless otherwise noted.