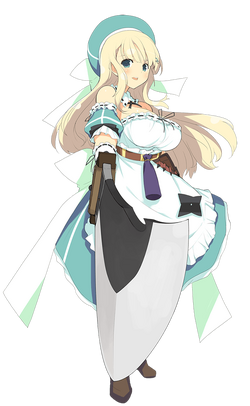 Yomi (詠) is a playable character from the Senran Kagura video game series. She makes her debut in Senran Kagura: Portrait of Girls.

Yomi lived most of her life growing up in the slums and harbors great hatred towards people who are satisfied with life. She watched her own parents die because of their poverty. In the street when she was having a meal, on the TV she saw that Ikaruga's foster father was giving enormous aid to overseas countries. This turned Yomi's hate towards Ikaruga. Yomi doesn't know the full details but it seems that her parents sold her off for their own desires.

In the Hanzō arc even until the end she held onto her hatred, but in the Hebijo arc, due to a certain item, she and Ikaruga eventually became friends. In Deep Crimson she is originally hostile towards Ikaruga while fighting her in Hebijo Castle, however when Ikaruga divulges Yomi in the secret of her adoption and true origin, she has a little change of heart. Even though she has grown a certain respect for her, Yomi is still troubled opening up to Ikaruga due to their social differences. Eventually however the two are able to overcome their barriers and become friends.