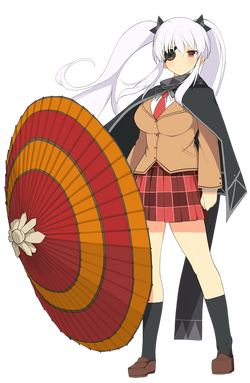 Yagyū (柳生) is a playable character from the Senran Kagura video game series. She makes her debut in Senran Kagura: Portrait of Girls.

Yagyū came from an average shinobi family and had a strong relationship with her younger sister Nozomi. The two were inseparable, with Nozomi admiring Yagyū’s devotion to becoming a shinobi. Unfortunately, Nozomi was involved in a sudden car accident and was taken to the hospital. Although despite the doctors' efforts, her injuries were too severe and she died. Yagyū was deeply hurt by this ordeal, and the solitude that came with it. However, she both knew and feared that the loss of her sister would eventually fade from her memory as time went on.

As a means of her never forgetting her younger sister, Yagyū dons an eyepatch crafted from her ribbon, cutting her vision and acting as a permanent reminder of her.

Upon her arrival at Hanzō Academy, she came across Hibari, who had such a striking resemblance to Nozomi that she had almost believed she had come back to her. Hibari's cheerful nature quickly overpowered Yagyū and the two quickly became friends. With Yagyū adopting an older sister role with her and seeing Hibari as her best friend that helped her get out of her solitude a little, she's always showing concern for her and being protective of her while also showing that she can't live without her, developing a "sister complex".

Although she will not admit it, Yagyū could never live in true solitude, and Hibari would soon become the primary reason she opens herself up to others, namely the rest of her class.