A Yōma (妖魔) is a type of parasitic demon born from bloodshed between shinobi. If the blood within a Shinobi Barrier flows freely enough, it can break through and emerge into the human world. It is the duty of a Kagura to face off against Yōma on the front lines.

Under shinobi law, only those who have graduated from school are allowed to be told about their existence. However, there are circumstances, such as the case with Miyabi and Imu, where they encounter them before that time.

In Senran Kagura: Shinovi Master -Tokyo Yōma-hen-, it is revealed that some regular Yōma can actually be sentient and breed with humans to create hybrids. Fubuki is an example with a male shinobi father and a female Yōma mother.

Yōmas are parasitic demons from an alternate dimension to Senran Kagura's world, and are mostly known for the common Yōmas that seek blood and hide, and a minority is known as Sentient Yōmas capable of breeding and speaking to Human.  They all constitute True Kagura's targets and a source of power for her as their souls are the Red Orbs required for her to awaken her powers.

Shin constitutes the core of all of them, being the oldest and most powerful, through Fubuki's Mother being already the most powerful Yōmas ever fought against by Shinobi. Generally, not counting special individuals, Yōmas are stronger and more resistant than regular shinobi. Yōmas are uncommon to encounter through, and can be sensed by nearby shinobi when met.

Their power is highly recognizable as they can hide another shinobi's presence just by theirs, and their abilities, for some types, can represent dangers to humans and organizations, as, considering the case of an Akayashi, they might kill and possess a VIP, and be responsible of a leak of confidential information.

Thus, they are hunt down by Kaguras and their teams, in order to destroy them and prevent potential trouble. However, such expeditions are rarely successful, often ending in the death of the whole team or a large majority and the Yōma escaping.

In combat, the presence of a nearby Yōma is manifested by some effect that changes the perception of the Barrier to a bloody ambiance, with everything tinted red and slightly hazy. It's only an illusion occurring only inside the barrier's limits, and this can be seen during multiple scenes throughout the games, notably Senran Kagura: Burst Re:Newal, when Yōmas can be fought for collectibles or during the Abyssal Story's missions.

It is also known that humans can become Yōma under the right conditions. In Senran Kagura 2: Deep Crimson, the Mikami Sisters are said to have once been human, and in Senran Kagura: Burst Re:Newal, Kagura was about to kill Miyabi because she was on the path to becoming a Yōma after using Blood Riot to defeat Ayakashi and Scarlet Ryōki.

Many large-scale calamities suffered throughout the world can be attributed t an ancient, yet still-living, Yōma known as "Shin". It's the heart and the soul of even the existence of Yōma. As long as the ancient Yōma remains undefeated, major disasters will forever continue to plague the population and they will mount and intensify over time as Shin grows, claiming countless victims every step of the way.

In order to defeat Shin, it must first be pulled into the shinobi's own time. The only way to do that is with the shinobi barrier. Blood spilled within it is the most effective bait to lure Yōma out from hiding.

First the shinobi must prepare to engage Shin. Until such a time, they must seek to delay it's coming as much as possible, such as they did during Senran Kagura: Peach Beach Splash.

During a Yōma hunt, Jasmine went along a team of friend as a Kagura, like all Yōma hunting parties. Through, during the fight, Jasmine was stuck in hesitation between saving her friends and killing the Yōma, and it made use of that hesitation to kill her friends and flee. Sayuri (Old Jasmine) tells this story to the Gessen team as a speech against emotions in combat.

The young but confident and ambitious Rin went on a Yōma hunt with a team of other shinobi, and a Kagura. Little is known aside that the whole team died except Rin, traumatized, broken by the failure, and can't resolve herself to return as a good shinobi. She is presumed dead and joins Hebijo as the teacher, Suzune.

The Mikagura Sisters (Renka, Hanabi, Kafuru) played one last time with a young Kagura, who told them that a Yōma will attack tonight and asked them to evacuate the village. The Sisters didn't take it seriously, and didn't tell anyone about her warning out of fear of the reactions of having broken the rules by playing with a stranger.

When the night fell, the Yōma came to attack the still-occupied village, but the Mikagura Sisters found the young Kagura trying to fight the monster without letting it get near of the inhabitants. She gets tired eventually and the Yōma swallows her, but she kills it with a kamikaze attack, "dying" in the process. The Sisters only recover a red ribbon, and finding her is their objective during the Kagura Millennium Festival.

Miyabi and her best friend Imu went into the forest to try playing shinobi for real. A Yōma surprises them and leads them to flee to their house. Miyabi's mother calls them for dinner, but decided to intervene upon noticing the Yōma chasing them, but she is killed instantly under Miyabi's eyes. Even if the Yōma's fate after this event is unknown, Miyabi is profoundly marked by the event which served as a motive for her to do Kagura's work: Exterminate all Yōmas, avenge her mother.

3 years before the series' events, Ryōki, a new member of the Gessen Team, joined a Kagura and a team of Shinobi a little after her enrollment to hunt a Yōma. The team is ambushed by a Hebijo team charged to kill them, and composed of "Evil" Shinobi like Miyabi and Imu. The ambush has forgotten about the Yōma, an Ayakashi who ambushed both team, and killed most of their members. Only Miyabi and Imu managed to survive the rampage, with Miyabi killing the Y mawith the Forbidden Ninja Art: Blood Riot, which ultimately results in her going into a coma.

This event served as the catalyst for several others in the series, as with Miyabi's Elite Team crushed and the leader Miyabi out of business, Hebijo had to replace them with what is now known as the Homura's Crimson Squad. Furthermore, rumors about the event are the main reason for Ryōbi and Ryōna to join the New Hebijo Team. Being unaware of Yōma, they were convinced that Miyabi was responsible for Ryōki's death, and aimed to avenge her.

In the Anime Shinovi Master, the half-yōma Fubuki has never forgotten how Shinobi have caused the death of her father and sealed her mother, and after being saved by Rasetsu and raised by Kurokage, she ambitions to have her revenge on all shinobi. With Rasetsu, Gekkō and Senkō' helps, she declares war to all shinobi at the end of the Shinovi Masters Tournament, challenged Kagura, and opened portals within the city and near a bath house from which swarms of Yōma have left. After leaving Gekkō and Senkō, she is defeated by Yumi in duel, while Asuka, Homura, Miyabi and their respective teams have stopped and sealed the Yōma and Kagura destroyed the portals definitively.

Gigantic and extremely powerful, these Yōma require a fully charged Shinobi Blood Barrier in order to summon them. So far, Dōgen is the only person known to have summoned any of them.

These Yōma are humanoid in appearance, but have the ability to communicate with humans, and even feel love and breed.

They have currently only appeared in the Shinobi Masters anime, and the New Link and New Wave mobile games.

The Yōma Generals are a special case where Dōgen combined Yōma with the blood of the ten shinobi girls who fought Orochi at the end of Senran Kagura: Burst. They each share traits with the shinobi whose blood they received.

Their ultimate purpose was to die in order to supply Kagura with Red Orbs so that she would mature faster and Dōgen could attempt to steal the power of her Reincarnation Sphere.

They are not shown to be able to use human speech.

Senran Kagura: New Wave had a few event bosses that didn't appear anywhere else in the franchise. These Yōma often had stronger forms to transform into, or could appear in both an animal-like and human-like form.

Although there is already a Spider Yōma and a Snake Lady Yōma, these have different appearances but could still be related or be alternate forms.

These include (unofficial names):

The Minotaur was the most commonly occurring of these, with the others possibly not having any other appearances after this. In later appearances, the Minotaur would sometimes have a different club, or also have a shield or some rudimentary armor. It also appeared dressed as Santa Claus for a Christmas event.

The Cat Woman is highly likely to be based on the Nekomata from Japanese mythology. It is hard to tell if it has two tails in its cat form, but its humanoid form depicts in playing a shamisen, a musical instrument often depicted in artwork with Nekomata. 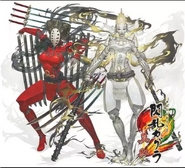 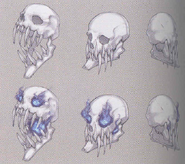