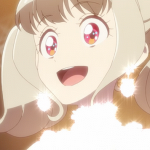 Hello, my name is Chris. I hope to help out around here whenever possible. I got into this series around the beginning of summer when I purchased the English version of the first two 3DS games (the dlc combo) and I instantly fell in love with how fun and charming I found it to be. I also bought the other two games released into English, and I can't wait to own more.

I like a bunch of characters, but from the original two groups, my favorites were Yagyu, Homura, Mirai, Yomi, Katsuragi, and Hikage. From the added two groups in Shinovi, I really like Miyabi and everyone on her team (minus Imu), and Yumi. I also like a bunch of the girls from the Card Game but I'll list those later...

Senran Kagura Stuffs I own

Retrieved from "https://senrankagura.fandom.com/wiki/User:Chrismh?oldid=33155"
Community content is available under CC-BY-SA unless otherwise noted.