Shura is a red-skinned Yoma with pointed ears and long red hair. She has earrings in her right ear, and wears a black horned headdress. Her outfit is white and yellow with a sun motif and she has a large metallic halo floating behind her.

Due to her great power, Shura is very self-assured and confident. She relishes a great battle and gets bored easily if there are no strong opponents.

When Daidōji provides her with an enjoyable battle, she decides to spare Daidoji, much to Rasetsu's annoyance.

Long ago, Shura was part of Rasetsu's group along with Yasha. She was by far the strongest of the group, and had even defeated one of Kagura's previous incarnations. However, at some point she was sealed away in an unknown place.

In present day, after Rasetsu's plans with Yasha failed as Yasha ended up allying with Yūyaki, Rasetsu now seeks to awaken Shura.

Shura is a non-playable boss in Senran Kagura: New Link. 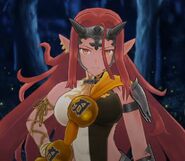 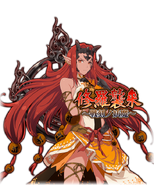