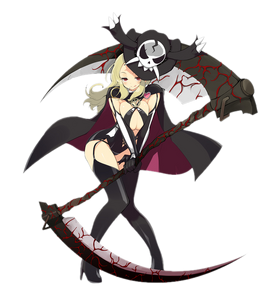 According to the Shinobi Syllabus for Senran Kagura: Shinovi Versus, Shiki's parameters are as listed:

Shiki's endurance is above average, meaning she can take blow after blow without worrying so much about succumbing to status effects; however, she may want to bow out sooner than later due to average health and below average defense. As few have attack strength to rival hers, chaining her attacks into her Aerial Rave to deal significant damage is always a winning strategy.

Shiki's in-game stats from level 1 to level 50. Please note the numbers listed under the level intervals (anything with a +) does not indicate how much the stat increases between the two levels but rather how much it increases for every 1 level in that range:

General Advice
Shiki's attacks involve spinning and throwing her highly destructive double-bladed scythe, which not only produces incredible range, but often results in poisoning her adversaries. Against a group, merely use those range attacks to gather everyone in sight and launch them into an Aerial Rave. For stronger enemies such as bear assassins, it's better to lock onto them and charge her Breach Art by holding down the

button before setting them up for an Aerial Rave. When Shiki uses her charged Breach Art, she transforms into a blood mist and becomes temporarily invincible -- a particularly handy technique when dealing with hard-hitting enemies.

Flash/Flash Mode
For group battles, use Shiki's chain attacks. For stronger enemies, charge her Breach Art and aim for an Aerial Rave. Finally, due to its wide attack range and resulting ability to pull in surrounding foes, use

against a large group of enemies.

Yang/Yang Mode
Just like in Flash Mode, Shiki can't go wrong using her chain attacks and Breach Art as a basic battle strategy. Against a group of enemies, mash

to build her Ninja Art gauge quickly and allow her to take advantage of her Secret Ninja Arts much sooner.

Yin/Yin Mode
Shiki's weak attacks can send out bats. In order to reduce her risk of being hit, it's better to command them a good distance away from the enemy. Be warned, however, that if she locks onto a target, her bats will have limited homing abilities.

Retrieved from "https://senrankagura.fandom.com/wiki/Shiki/Shinovi_Versus?oldid=29493"
Community content is available under CC-BY-SA unless otherwise noted.