Senran Kagura: Peach Beach Splash (閃乱カグラ PEACH BEACH SPLASH) is a third-person shooter for the PlayStation 4 and Microsoft Windows via Steam, published by Marvelous Entertainment. The game was released for PS4 on March 16, 2017 in Japan, September 22 in Europe, and September 27 in North America. It then released worldwide for Steam on March 7, 2018.

In the world of shinobi, there is a mysterious water gun tournament that has existed since ancient times.

Whether you’re a good shinobi, bad shinobi, fugitive shinobi, or dead shinobi, your standpoint doesn’t matter. Victory or defeat will be determined with tournament-provided water guns. All of your special abilities as shinobi cannot be used.

The story that starts here is a record of playing in water by the the young shinobi students. What sort of trails will be left on the sandy white beach that continues on forever?

That’s something no one yet knows.

At the “Peach Beach Splash” midsummer festival, a battle between more than 30 girls will unfold. You’ll also be able to enjoy side stories of the girls’ everyday lives.

Girls armed with magnificent water guns will freely bustle about the field. Win by drenching your opponents in water. Aim for the chest and buttocks using your water gun!

Take the battle online in Network Battles, where you can customize your character and their loadout. Up to 10 shinobi around the country can play together in team battles.

Each girl is to have their own unique set of swimsuits to wear along with access to a ton of accessories and special materials to customize them however the player desires.

In this tournament, the girls are given an array of water guns to utilize. There are several gun types and various ways to customize them to make them stronger. As they progress, these guns will upgrade, making them more powerful as the tournament prolongs. There are also various stage heights, obstacles, and gimmicks that can be used to the character's advantage.

In Senran Kagura: Peach Beach Splash, there are all kinds of different Water Guns. They all vary in attack range, mobility, water consumption rate, power, and more depending on the types used. Switching things up according to your battle style and match up will be the key to success. Weapons include dual pistols, Gatling guns, sniper rifles, and various other types of water guns. Water guns are also able to level up over time. The same kind of Water Gun can evolve into something completely different in terms of looks and characteristics.

Outside of water gun-based attacks, there are also non-water gun-based “close-range attacks", which is also known as a melee attack. These attacks have short range and are difficult to land, but since they can push the opponent back, a successful hit will do serious damage.

While the shinobis’ “Secret Ninja Arts” are banned for use in the Peach Beach Splash tournament, you can use Cards for compensation.

There are three types of cards: “Weapon", “Skill", and “Pet” — used for customization. Since you can combine cards to change your abilities, you can put together your own deck to fight with. Equip various cards with ninja arts to strengthen the shinobi girls. There are over 810 cards with beautiful illustrations to see.

Skill cards have various effects, such as lowering the enemy’s attack power or restoring you and your allies’ HP. You can equip up to six at at a time, so use skill cards in addition to your choice of water gun well to progress the battle more advantageously.

A card that can summon a companion character to fight alongside the player. You can equip up to three at a time, so you can summon different characters based on the situation. Depending on the companion you choose, they’ll offer various support like cover fire and evasion. Choose Pet Cards based on appearance or choose them based on strategy. Equip your favorite companions and head into battle.

You can get 10 new weapons, skills, and companion cards from a single card pack. You can purchase new cards packs from the in-game store, as well as get them as stage clear rewards.

Skill Cards and Pet Cards can be used once enough cost is gathered. They are powerful, but since you can’t use them one after the other, you should activate them only at proper times.

Cards have five different levels of Rarity: N, R, SR, SSR, and UR. Cards that are Rarity Level SR and above have voices attached to them.

Cards also have levels and can be strengthened through synthesis with other cards.

As bullets of water fly about, the girls’ chests will burst. Finishing techniques are even more extreme in beautifully evolved graphics.

The enemy is finished off by just soaking them with water. Activate a Kunekune Finish, or also known as "Squirmy Finish" to finish off the opponent. During a Squirmy Finish, the player can aim at the downed opponent’s face, chest or buttocks. Depending on the water gun equipped, you’ll be able to see various poses.

By successfully activating a Squirmy Finish and completing it, you’ll get a “Finish Bonus” that increases the speed of your skill cost charge for a fixed amount of time. 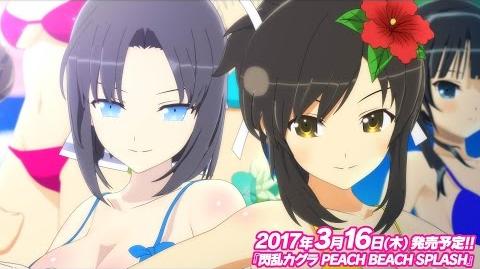 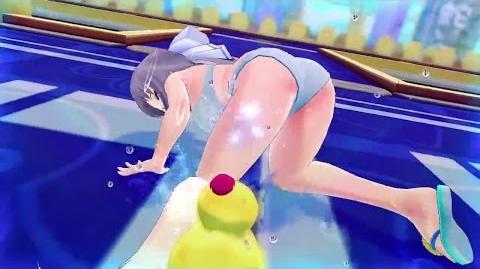 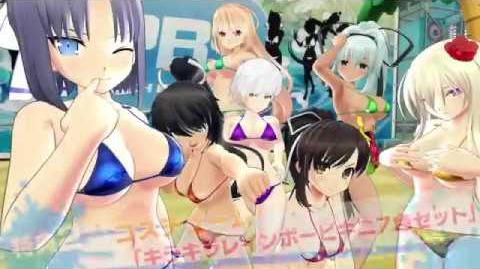