Master Suzune (By her students)

Rin (凛), also known as Suzune (鈴音), is a playable character in the PlayStation sub-series of Senran Kagura. She was a teacher at Hebijo Clandestine Girls' Academy. She is always cool, and her strength is top class. She is very severe and strict with her students, not believing in the word "mercy". 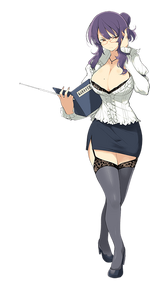 As a teacher of Hebijo, she appeared to be tall, with her red-framed glasses on, every time whenever she is on school grounds. When teaching, she wears a tight black miniskirt with black stockings rimmed with black paisley, attached to a garter belt. She also wears a long-sleeved, classy, white dress shirt which reveals much of her bust; while wearing a black camisole underneath.

When she transforms, she dons a tight sleeveless shirt that starts exposing her stomach that is connected to a piece that covers her nose and mouth. Around her neck is a red triangular shaped scarf with white triangle marks and white dots inside of the triangles. She also wears baggy red pants with knee-length black high-top sandals, with a gray cloth wrapped around her waist. Black panties are exposed underneath the cloth and pants.

Being both a teacher and a shinobi, Rin is a calm, collected woman who barely ever expresses emotion among her companions. She shows much wisdom when it comes to the subject of yōma and battling them, as she was once nearly killed by them. She does, however, show emotions around her Hebijo Elites and Crimson Squad, as well as with Kiriya and Daidōji.

Rin had been known not to believe in the word "mercy" where she brutally trains her students with no remorse for their safety unless extreme circumstances are presented, such as when fighting yōma and shinobi that are way out of her students' league. However, 300 hours underwater and country-mile sprints are child's play in her book.

Rin's characteristic speed and giant shuriken allow her to toy with enemies using ranged attacks. The shuriken can also be used as a claw weapon, making her an adept fighter at any distance.

Retrieved from "https://senrankagura.fandom.com/wiki/Rin/Timeline_2?oldid=58799"
Community content is available under CC-BY-SA unless otherwise noted.