She is also one of Kuoh Academy's Two Great Ladies alongside Akeno Himejima.

Rias is a beautiful young woman with white skin, blue eyes (blue-green in anime season, 1-3) inherited from her father, Zeoticus, and a buxom figure. Her most distinctive feature is her crimson hair which she also inherited from her father that reach down her thighs with a single hair stand (known in Japan as ahoge) sticking out from the top. Her hair has loose bangs covering her forehead and side bangs framing her face. She is also one of the tallest female characters of the series.

Although Rias has worn various types of clothing throughout the series, her commonly worn outfit is the Kuoh Academy girls' school uniform, which consists of a white long-sleeved, button-down shirt, with a black ribbon on her shirt collar worn under a black shoulder cape and matching button-down corset, and a magenta skirt white accents, and brown dress shoes over white-crew length socks.

Rias is a very kind and very compassionate, optimist, especially to her servants and people close to her. She gets angry and violent whenever people insult her or her peerage showing a fiery side to her. 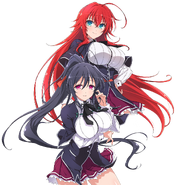 She shares the same voice actress with Ryōbi.