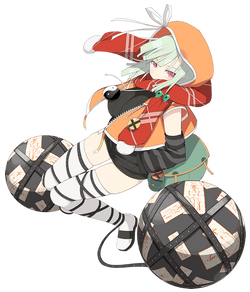 Naraku is a member of the Goshin Clan and was appointed priestess and guardian of the Reincarnation Sphere, as well as given the responsibility of helping fully reawakened Kagura.

Naraku is not her real name, but merely the title given to the Guardian of the Reincarnation Sphere.

Ever since she was a child, she had to spend all her days overseeing Kagura while she remained in the Reincarnation Sphere, awaiting her rebirth. Naraku had no childhood, and could never even leave the village as her duty was to remain seated watching over the sphere at all times.

However, Naraku did not mind this, and enjoyed peering at the shiny sphere, imagining what Kagura might be like once she emerged from it. She secretly hoped that Kagura might be her first friend, and often smiled at the sphere. This smile reached Kagura, even in her unborn state.