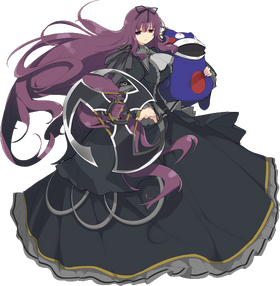 According to the Shinobi Syllabus for Senran Kagura: Shinovi Versus, Murasaki's parameters are as listed:

Murasaki may have high health and endurance, but she has low defense. That said, she's still at her most effective in close quarters, since she has limited long-range moves. Take advantage of her Breach Art, as its use makes her briefly invincible.

Murasaki's in-game stats from level 1 to level 50. Please note the numbers listed under the level intervals (anything with a +) does not indicate how much the stat increases between the two levels but rather how much it increases for every 1 level in that range:

One of Murasaki's biggest weaknesses is her complete lack of ranged capability. She has no ranged attacks aside from Stay Away, her ground dash is relatively short, and her air dash, while longer, moves rather slowly. As a result, dealing with enemies that focus on ranged attacks can be a hassle. Generally the best way to go about it is to use her air dash close to the ground to get as close as possible, and try to hit with her air attack. If done well, she will land shortly after using the attack, allowing her to continue into her normal combo chain.

In close quarters, however, she can easily become a devastating force with her quick, damaging attacks and breach art. Her breach art is unique in that it can be held indefinitely and released at will. While she's immobile as long as it's held, she's also almost completely immune to hitstun and knockback. It immediately launches whatever it hits, allowing her to follow up with an aerial rave, making for an excellent counterattack. Timed right, she can even stand her ground against a Secret Ninja Art and retaliate, making her one of the only characters who can counter Ninja Arts without having to use one of her own.

Retrieved from "https://senrankagura.fandom.com/wiki/Murasaki/Shinovi_Versus?oldid=42177"
Community content is available under CC-BY-SA unless otherwise noted.