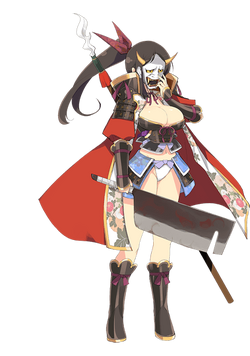 According to the Shinobi Syllabus for Senran Kagura: Shinovi Versus, Murakumo's parameters are as listed:

Due to Murakumo's low health and endurance, it's not recommended to attack up front. Take advantage of her dashes by rapidly tapping the

to close in or get away. Murakumo is best used for hit-and-run strikes.

Murakumo's in-game stats from level 1 to level 50. Please note the numbers listed under the level intervals (anything with a +) does not indicate how much the stat increases between the two levels but rather how much it increases for every 1 level in that range:

General Advice
With spear and cleaver in hand, Murakumo ramps up her speed to mericilessly deliver a multitude of flawless attacks. Unfortunately, she can't take what she dishes out, as staying in enemy range for too log leaves her susceptible to being stunned by their counters.

Getting around this particular weakness only requires some fancy footwork; against stronger enemies, back away and use her Breach Art which can cover long distances, or jump up and charge her weak aerial attack. Take this opportunity to aim and when she's ready she'll surge forward with her spear before her opponents can react, striking from outside her enemies' rage and greatly reducing the risk of being hit.

Flash/Flash Mode
In Flash, it's best to attack with Murakumo's chain attacks, Breach Art, and weak aerial attack. However, due to her attacks' low damage potential, it may be best to perform a Shinobi Transformation against stronger enemies.

Yang/Yang Mode
Murakumo's best option in Yang is to mash

Yin/Yin Mode
Due to her significant defense drop in Yin, Murakumo cannot afford to lower her guard even against weaker enemies. Put some distance between Murakumo and her enemies, then use her charged Breach Art and charged weak aerial attack to deal damage. That's the best way to keep her safe from opponents' attacks.

Retrieved from "https://senrankagura.fandom.com/wiki/Murakumo/Shinovi_Versus?oldid=29491"
Community content is available under CC-BY-SA unless otherwise noted.