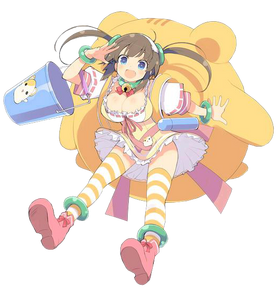 According to the Shinobi Syllabus for Senran Kagura: Shinovi Versus, Minori's parameters are as listed:

Minori's dash and attack are low, while everything else is fairly average. But don't judge her by her looks; if she uses her Snack Charge, all her stats will increase.

Minori's in-game stats from level 1 to level 50. Please note the numbers listed under the level intervals (anything with a +) does not indicate how much the stat increases between the two levels but rather how much it increases for every 1 level in that range:

General Advice
Minori has a unique, multi-phase ability; Snack Charge. When she activates her Sweets Stock by pressing

, she'll toss a sweet into her pail. so log as she battles normally with the sweet still in place, her Sweets Stock -- which has various levels and is representative of Minori's own stats -- will increase every few hits. Pressing the

button again while the Sweets Stock is activated will initiate her Sweets Shock, dealing damage based on what level her charge is at.

Whether she's facing off against a group of enemies or battling one-on-one, connect her attacks into a Aerial Rave while in the charged state to make the most of a most unusual Breach Art. For stronger enemies, triggering her Sweets Shock when he pail is glowing a rainbow of colors is ideal for maximum damage.

Flash/Flash Mode
After activating Sweets Stock, go for Minori's chain attacks and lead into an Aerial Rave to deal damage as well as increase her stats. Raising her Sweets Stock to at least level 3 will double her attack power.

. After she's at a sufficient level, use her Secret Ninja Arts.

Yin/Yin Mode
Just like in Flash and Yang, raise Minori's Sweet Stock while fighting. She can easily lose her health against stronger enemies, so gain some distance first, then use her Sweets Stock for some free damage.

Retrieved from "https://senrankagura.fandom.com/wiki/Minori/Shinovi_Versus?oldid=29495"
Community content is available under CC-BY-SA unless otherwise noted.