Green
Mayumi is a boss character that appeared in Senran Kagura: New Wave for an event in 2013. Since then she has only made minor background appearances in artwork.

Very little is known about her, even less than fellow independent bosses Reika and Hiroko.

She has short brown hair and a school uniform that resembles the school uniforms of Reika and Hiroko, except hers is dark blue in contrast to Reika's brown and Hiroko's purple.

She wears a black mask covering the lower half of her face and carries a wooden sword.

Her Shinobi Form is unknown.

Mayumi is a non-playable boss character in Senran Kagura: New Wave. She first appeared for the "NINJA†RIDERS" event which ran from May 7th to May 16th, 2013. This event introduced cards of some playable characters in motorcycle outfits or riding motorcycles, as well as Mayumi's fellow independent bosses, Reika and Hiroko.

Mayumi was described with her friends as "bad students with a strange atmosphere." Defeating them got you Rider Points for the event, which gave you the opportunity to receive various event rewards.

Considering the "strange atmosphere" comment, and the Reki was the final boss of the event, they may have been under her influence.

While Reika and Hiroko would reappear in later events and get shinobi forms, it does not seem like Mayumi received any further appearances outside of cameos in artwork. 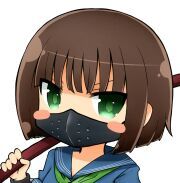