Leina is almost exclusively adorned in armor with a distinct breastplate that gives her protection and immunity to certain demonic attacks. On her right arm and neck is a series of long brown straps wrapped around her that dangle about freely. For added protection, she carries a full-arm, armored gauntlet on her left arm with a buckler mounted on it.

Leina is a headstrong woman, who likes to do as she wants, but is also easily led to admire others, as seen with her first encounter with Risty. She is very determined to fight, and eager to branch out and fight different opponents, so that she may become stronger to become Queen.

Despite her eagerness to fight, however, she is prone to fear, and is frequently shown wetting herself in terror when an opponent overwhelms her.

Leina is an adventurer wandering throughout the world. She's covered in sand by the harsh travels, but her dignified presence stays strong.

Through the various villages and cities she's passed by, Leina has gotten rid of the trouble-making bandits and monsters, as well as eradicated an evil sorcerer residing in ancient ruins. However, her acts weren't driven by money or prestige, but by her devotement to refine her skills and her sense of justice. Even the current Queen's Blade is but a mere test of her physical abilities.

She's the second daughter of Count Vance, a family that controlled the Continent before the Queen's Blade was instaured, and is now a powerful entity that controls the forces opposed to the Queen.

But Leina had no interest on the huge influence she'd have someday, or in the suffocating life of an aristocrat, and always devoted herself to training her swordsmanship to show her own power.

She once crossed swords with Risty, but Leina forfeited the fight when she discovered that Risty had a strong sense of justice and was a protector of the weak. 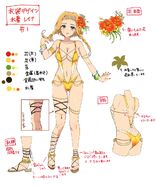