Kula Diamond (クーラ・ダイアモンド) is a character from the SNK Multiverse, appearing in the King of Fighters fighting game series. Her official nickname is "Ice Doll" (アイス ドール). She is one of SNK's most iconic girls and SNK's representative mascot of their new millennium era.

She appears as a guest character in the mobile game Shinobi Master Senran Kagura: New Link and has also appeared alongside Mai Shiranui, Ayane, Marie Rose and Honoka in Dead or Alive 6. 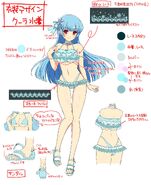