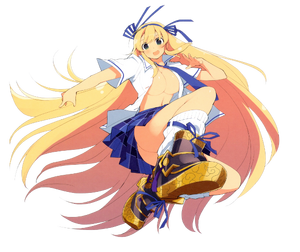 According to the Shinobi Syllabus for Senran Kagura: Shinovi Versus, Katsuragi's parameters are as listed:

Katsuragi's endurance is top-notch. Her health, attack and defense are all high as well. All in all, she's a very powerful character; the only thing she lacks is speed. use her dash to cover that weakness.

Katsuragi's in-game stats from level 1 to level 50. Please note the numbers listed under the level intervals (anything with a +) does not indicate how much the stat increases between the two levels but rather how much it increases for every 1 level in that range:

General Advice
Katsuragi's main features are her devastating power and her high endurance. Even if she's hit, she will most likely not stagger - and if the damage is low, she can run right through and go on the offensive. On top of that, a majority of her moves can be charged by holding down the attack button. Her charged moves will deal 3 times more damage, so they're well suited for use against groups or stronger enemies. Her charged

can send out blade of wind that strikes at distance. Her wind blades can also lead into an Aerial Rave and can build her Ninja Art gauge quickly. All in all, her wind blades are highly recommended.

, as it does great damage. If there are many enemies in the area, Katsuragi can utilize the wide range of

. For enemies with high endurance, use her charged Breach Art to lead into an Aerial Rave.

Yang
For a group of enemies, gather them and launch a wind blade with

. Katsuragi doesn't have any attacks that can hit behind her, so if she's ever surrounded, jump and dash out or use her Secret Ninja Arts.

Yin
During a combo, Katsuragi's second weak attack has the widest range. Against a group of enemies, use

to drop the enemies without much risk. For enemies with higher endurance, go for an Aerial Rave.

Retrieved from "https://senrankagura.fandom.com/wiki/Katsuragi/Timeline_2/Shinovi_Versus?oldid=36858"
Community content is available under CC-BY-SA unless otherwise noted.