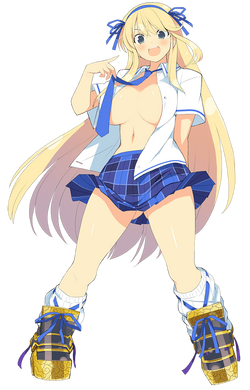 Katsuragi (葛城) is a playable character from the Senran Kagura video game series. She makes her debut in Senran Kagura: Portrait of Girls.

When Katsuragi was still a little girl, she lived a normal life while playing with her pet dog, Choco. Her parents were both shinobi as they fulfilled missions that were issued to them by the higher ups. However, one day, both of Katsuragi's parents failed at one particular mission and were told to give up their lives as punishment. To avoid getting Katsuragi involved, the two decided to become renegade shinobi and ran away while abandoning Katsuragi.

Feeling sad and abandoned, Katsuragi thought to herself and decided that she will become a strong shinobi in order to atone for her parents' crimes while hoping that she'll be reunited with her family someday. At some point, she enlisted in Hanzō Academy.

During her first year, she encountered a student that goes by the name of Ikaruga. As much as she tries to interact with her, Ikaruga ignores her. This annoyed Katsuragi to no end as she tries to get along with her. As they interact with one another, Katsuragi learned why Ikaruga has been acting the way she has been, which caused her to remind herself on how lonely she's been since her parents left her behind. As the two started to understand one another, they eventually started becoming friends.

During her second year, she and Ikaruga helped another student, Asuka get through her first year in the Academy. However, during a training session, there was an accident that caused Ikaruga to injure Asuka. Katsuragi figured that Ikaruga was still bothered by something, so she asked her to come to an open field, where the two will fight one another to be able to escape from their problems.

After the fight, the two were able to escape and their friendship was solidified.

According to the Senran Kagura: Official Design Works, Katsuragi was the first character design done by Yaegashi simply because he likes blonde hair. He decided on his own that she would be a character that used kicks which played a role in her design process, leading to her having the solid-looking boots she wears.