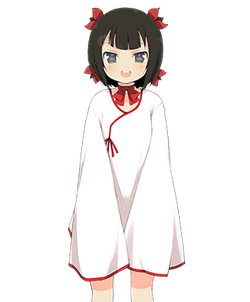 Kagura (かぐら, 神楽) is a character in the Senran Kagura video game series. She makes her debut in Senran Kagura 2: Deep Crimson. She is a unique and eternal being who repeatedly reincarnates every century to eradicate Yōma. Records of her date back as far as 9 centuries.

Kagura gains power and advances in stages to become more powerful. To do so, she needs to consume Red Orbs from Yoma she defeats.

In her first stage, she takes the form of a young child. She has short black hair with red ribbons in her hair, she wears a long white and red overcoat with pink bloomers that have red etching on them. Her expression is usually happy and she has odd emblems where her pupils should be. She's always barefoot.

In her second form, she takes on the appearance of a teenager, with a white dress with black trimmings and white shoes. Her hair is also a bit longer. Her face and expression are usually stoic.

In her third form, she takes on the appearance of an adult, with a black dress with brown trimmings and black shoes. Her hair is also longer. Her face and expression are usually ruthless.

As True Kagura, her appearance is largely similar to her adult form, though her eyes now glow a bright red color. She wears a black breastplate and red cape, both bearing the symbol present in her eyes.

In her child and teen form, Kagura's abilities are almost non-existent, but in her Adult form, she has reached her awakened state. She possesses the ability to freely manipulate space and can teleport or tear rifts in reality.

In her fully Awakened form as True Kagura, she has the ability to instantly smite any Yōma. She has total mastery of spatial manipulation and could even flip the world upside down.

Deep Crimson: While on a school trip, Asuka and her friends found her being chased by yōma and saved her. At first glance, she speaks like a child, but she says things that no child would. Lacking almost any ability to defend herself, she relies on her guardian Naraku for protection. [1]