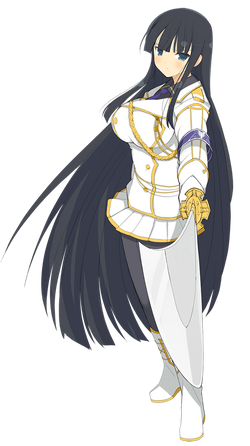 Ikaruga (斑鳩) is a playable character from the Senran Kagura video game series. She makes her debut in Senran Kagura: Portrait of Girls.

Ikaruga comes from a lesser, distant branch of a rich and noble shinobi clan whose outward appearance is that of a large zaibatsu known as the Phoenix Conglomerate. Because their only son, Murasame lacked sufficient talent as a ninja, they were in in a very desperate situation. After being alerted of a distant relative who showed great promise as a ninja, Ikaruga was adopted by them, and inherited the family treasure Hien, which earned her the resentment of her new older brother.

Because of this, she harbors a huge amount of guilt, feeling partially responsible for ruining his dream of being the heir to the family's shinobi legacy. This problem has also affected her behavior.

By the time she enlisted in Hanzo National Academy, she became distant from others as she created walls around herself and felt nothing but loneliness. She encountered Katsuragi in the same Ninja Studies class and the two didn't get along with one another right away.

However, as the two interacted more often and understood one another, Ikaruga's behavior slowly started to alter as she started to realize that she isn't lonely at all.

Ikaruga appears as a playable character in the mobile card collection game, Senran Kagura: New Wave, alongside the other members of Hanzo Academy.

Retrieved from "https://senrankagura.fandom.com/wiki/Ikaruga?oldid=52598"
Community content is available under CC-BY-SA unless otherwise noted.