Camellia Sasanqua (a type of flower)

Unknown (Always Blindfolded)
Himetsubaki is a first-year student of Hebijo Clandestine Girls' Academy that is exclusive to the manga Senran Kagura: Crimson Snakes, along with her partner, Rindō.

Himetsubaki has short light red hair, with short pigtails. Her eyes are always covered by a black blindfold with a yellow ninja star on it, but it's not known if she possesses an Eye Technique.

It is not known if the blindfold is sheer enough for her to see through, or if she sees through other means or simply doesn't use her sight.

She wears a traditional Hebijo student uniform with a mesh undershirt with wrappings around her elbows, and pink and white striped stockings. Her Shinobi Transformation is unknown.

Himetsubaki tends to be more outgoing and excitable, especially compared to Rindō.

Himetsubaki and Rindō first appear in Chapter 3 of Senran Kagura: Crimson Snakes, where Homura is instructing them on Scrolls and Shinobi Transformation.

Her and Rindō continue to appear in the school and in support roles on missions. They are also scene carrying the luggage of the elite students for a trip to the beach. 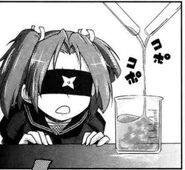 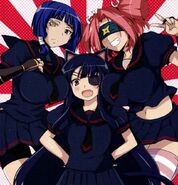