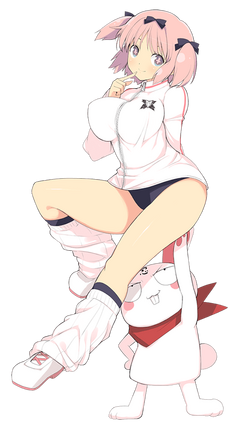 Hibari (雲雀) is a playable character from the Senran Kagura video game series. She makes her debut in Senran Kagura: Portrait of Girls.

Hibari comes from a long-standing noble ninja family that has spanned generations. Even her immediate family is pretty large, as she has a huge amount of siblings.

Despite all of her brothers and sister having far more skill and promise as shinobi, Hibari was the one chosen to be the heir to the family. This was because she was the only one to develop the family's signature power, Kagan.

Hibari never really wanted to become a shinobi. She wanted to open a shop and sell sweets. Despite showing questionable potential as a ninja and messing up quite often, her family was always positive and supportive of her.

Instead of showing resentment of jealously, her siblings would instead be proud and encouraging, which Hibari found to be odd and even discouraging, given her ineptitude.

However, with the degree of enthusiasm and support from her family, Hibari couldn't bring herself not to follow through, now doing her utmost best to become a great shinobi. This is probably where she gets her innocence and sweetness from, but is also the source of her lack of confidence in her own fighting style and abilities.