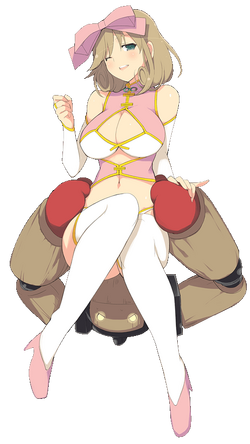 Haruka (春花) is a playable character from the Senran Kagura video game series. She makes her debut in Senran Kagura: Portrait of Girls.

Her mother treated her obsessively and kept her in the house all the time and treated her like a doll. Her father, who was a doctor, was corrupt and having a bunch of affairs. Haruka was brought to the point where she wanted to burn her house down. Rin stepped in and stopped her and taught her puppetry skills. With those skills she forced her father to come forward and admit to his corruption. After that she effortlessly (i.e. had mad skills) enrolled into Hebijo. She was the first member to join the Elite Class and was already a 3rd year by the time the others joined.