Not to be confused with the school, Hanzō National Academy.

Hanzō(半蔵) is a character in the Senran Kagura video game series. He made his debut in Senran Kagura: Portrait of Girls. He is Asuka's grandfather and Hanzō Academy was named after him. Even though he is a well renowned Ninja, he's still an inexcusable pervert in Senran Kagura anime specials, Senran Kagura: Bon Appétit!, and most of the franchises.

Hanzō is a master of the hidden arts and known to all shinobi. He established a squad of operatives known as the Shinobi Unit in the First Division of the Cabinet's Secret Service.

To recognize his accomplishments and to motivate the students to follow his example, Hanzō National Academy was named after the legendary Hanzō. 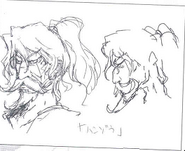