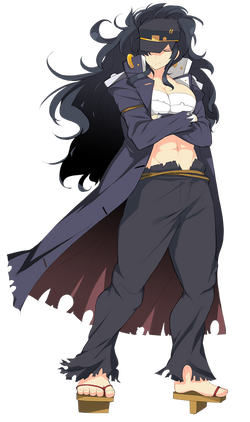 Daidōji (大道寺, sometimes spelled "Daidouji") is a playable character of the Senran Kagura series. She makes her debut in Senran Kagura: Portrait of Girls.

A legendary senior who returns to Hanzō every year during the graduation period. In the past, she was Rin's underclassman and the two would spar together regularly. Master Kiriya noted that while Daidōji was stronger than Rin, she was unable to beat her senior due to Rin's unyielding nature.

Daidōji swore that she would one day make Rin admit defeat, but the chance never came. Shortly after Rin graduated, it was reported that she died while on a mission. The news devastated Kiriya, but Daidōji somehow knew that Rin was alive somewhere. She now patiently bides her time in anticipation of her final rematch with her senior; the fateful day that will be her true graduation exam.