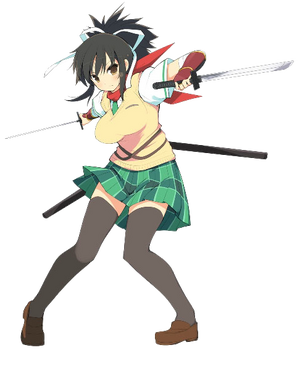 According to the Shinobi Syllabus for Senran Kagura: Shinovi Versus, Asuka's parameters are as listed:

None of Asuka's stats stand ou, but none of them are lacking either. She's well balanced for close range combat, and she can take a few hits while she's at it.

Asuka's in-game stats from level 1 to level 50. Please note the numbers listed under the level intervals (anything with a +) does not indicate how much the stat increases between the two levels but rather how much it increases for every 1 level in that range:

General Advice
Asuka's decent stats and lack of weaknesses make her easy to use, without any hard techniques required. Since she dual-wields wakizashi, she has many multi-hitting attacks, including her highly effective

-mashing Yang combo. She can also hold the

button to charge her Breach Art, in which she burrows and travels underground, then quickly resurfaces to hit any locked-on enemy - regardless of range - and set them up for an Aerial Rave. Asuka is also invulnerable to attacks while she's underground, so her Breach Art works well against stronger enemies in order to avoid their powerful attacks.

Flash
Asuka's moves during Flash are all simple and easy to use, Her basic strategy is to chain attacks into an Aerial Rave, but against stronger enemies like bear assassins, it's best to use her Breach Art to keep her safe from their attacks.

all you can; it's very easy to use, it controls groups of enemies well, and it can stun them to boot. This combo will also fill up Asuka's Ninja Art gauge quickly, so pit it to good use against stronger enemies.

Yin
Since Asuka's Yin attack is high, she can use her weak attacks to take out low-endurance enemies. For enemies with higher endurance, she can hold the

button to charge her Breach Art into an Aerial Rave and take them out one by one.

Retrieved from "https://senrankagura.fandom.com/wiki/Asuka/Timeline_2/Shinovi_Versus?oldid=36780"
Community content is available under CC-BY-SA unless otherwise noted.